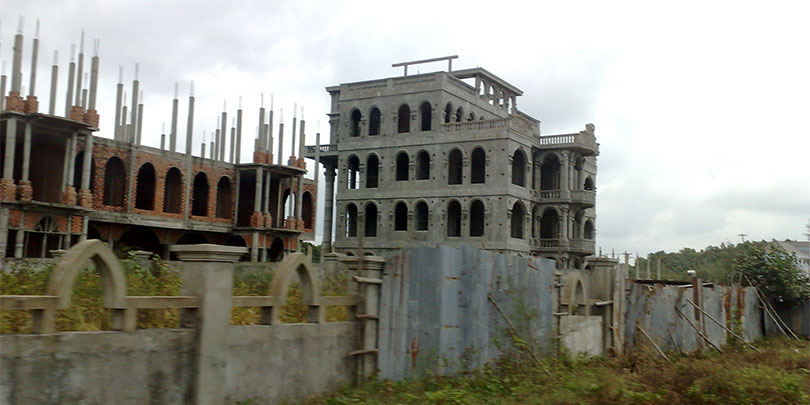 In QBE Ins. Corp. v. Adjo Contracting Corp. (N.Y. App. Div. 2d Dep’t Oct. 29, 2014), an intermediate appellate court in New York confronted cross-appeals involving 15 different insurers embroiled in multiple lawsuits, including consolidated class actions.  The core issue of the case was whether the insurers for a variety of subcontractors were obligated to provide a defense to tenants’ lawsuits against the developer and general contractor of a doomed residential complex.  Along the way, the court addressed more than a dozen different coverage issues under the laws of three states.

In 2003, Archstone-Smith Operating Trust, one of a group of related entities with the name “Archstone,” contracted with Tocci Building Corporation of New Jersey to build a complex of rental apartments in Westbury, Long Island.  The construction was completed in 2007.  By March 2008, extensive water intrusion, leading to mold growth, forced Archstone to terminate all tenant leases.

Four tenants filed class actions against certain Archstone entities, and these were ultimately consolidated into a single action, In re Archstone Westbury Tenant Litigation.  A fifth tenant lawsuit, the Hunter case, was not consolidated with the others.  Among other things, the tenants claimed they had suffered property damage from water and bodily injury from water and mold.  In response to these suits, Archstone sued Tocci for common-law indemnification.

Along with Tocci’s insurer, Travelers Indemnity Company, Archstone sought defense and indemnification from the 14 insurers of the subcontractors that had worked on the project.  One of those insurers, QBE Insurance Corporation, filed a declaratory judgment action, alleging that it had no duty to defend Tocci against either Archstone or the tenants.  Second- and third-party actions ensued, and it was this tangle of coverage claims that ended up in New York’s Appellate Division.

The Faulty Workmanship Lies Not in Our Building, But in Pennsylvania

Two insurers that covered the same subcontractor for different policy periods were required to defend claims for injury or damage caused by an “occurrence,” and their policies defined “occurrence” to mean “an accident, including continuous or repeated exposure to substantially the same general harmful conditions.”  These insurers argued that injury or damage resulting from faulty workmanship is not caused by an “occurrence.”  That argument, in turn, required a decision about the applicable law.

Under New York law, a commercial general liability policy does not cover damage to the work product that the insured created in a defective manner, but it does cover “faulty workmanship in the work product which creates a legal liability by causing bodily injury or property damage to something other than the work product.” On the other hand, in Pennsylvania, “damages that are a reasonably foreseeable result of the faulty workmanship are also not covered under a commercial general liability policy.”  Thus, under Pennsylvania law, sickness and property damage arising out of prolonged exposure to mold are a “natural consequence of faulty workmanship which allowed water to infiltrate the buildings.” They are not fortuitous, and they are not caused by an “occurrence.”

Generally, in disputes involving liability insurance contracts, New York courts will apply the law of “the jurisdiction with the most significant relationship to the transaction and the parties.”  In most cases, this will be the jurisdiction “which the parties understood was to be the principal location of the insured risk.”

Here, however, this question was complicated by the fact that the subcontractor operated more than one facility, and so its policies “covered risks in multiple states.” In that situation, New York’s choice of law rule is that “the state of the insured’s domicile should be regarded as a proxy for the principal location of the insured risk.”

Because the named insured under the policies was domiciled in Pennsylvania, the court applied Pennsylvania law.  On that basis, it awarded summary judgment to the insurers.

Two insurers for another subcontractor appealed from the trial court’s determination that they were required to defend the general contractor, Tocci.  The trial court had consulted the trade agreement between Tocci and the subcontractor, to determine whether the subcontractors’ scope of work overlapped with the claim in the underlying lawsuits.  On appeal, the insurers argued it had been improper for the court to look beyond the “eight corners” of the underlying pleadings and the relevant policies.

The Appellate Division ruled that the insurers had overstated the rigidity of the “four corners” (aka “eight corners”) rule:

The New York Court of Appeals has eschewed ‘wooden application of the four corners of the complaint rule’ in favor of ‘a rule requiring the insurer to [also] provide a defense where, notwithstanding the complaint allegations, underlying facts made known to the insurer create’ a reasonable possibility of coverage.

The inquiry didn’t end there, however, because the policies at issue were arguably governed by Texas law, and the insurers contended that Texas takes a narrower view.  Citing the Fifth Circuit’s decision in Ooida Risk Retention Group, Inc. v. Williams, 579 F.3d 469 (5th Cir. 2009), the New York court took an “Erie guess” that Texas would also permit review of the trade agreement, and it affirmed summary judgment in favor of coverage.

In a related argument, the insurers for several of the subcontractors argued that they had no duty to defend, because the underlying complaints did not allege damage or injury caused by the work performed by their insureds. The Appellate Division examined each claim, subject to its observation that the duty to defend is “exceedingly broad … and applies whenever the plaintiff’s allegations bring the claim even potentially within the protection purchased.”  Among its findings:

Four insurers for subcontractors contended that they had no duty to defend the developer, Archstone, because Archstone was not named as an additional insured in their policies.

Three other insurers argued that they had no duty to defend Archstone, because the Archstone entity that was named as an additional insured in their policies was not a defendant in the underlying suits.  That entity had been named as a defendant in two pre-consolidation tenant complaints, but those complaints were superseded by the amended complaint in the consolidated tenant class action.

The court agreed with the insurers regarding the duty to defend. However, the court stated that the policies could require the insurers to pay pre-consolidation defense costs, if the allegations in the earlier pleadings “implicate[d] the work” of a named insured or additional insured.  On the basis of this ruling, the court found that two of the insurers had no coverage obligation, and that the obligation of the third insurer to pay pre-consolidation defense costs presented triable issues of fact.

Several of the subcontractors’ insurers asserted defenses under policy exclusions.

Liability policies that provide coverage to additional insureds often feature an “ongoing operations” endorsement, under which the additional insured may not receive coverage for claims based on work that the named insured has already completed.  In QBE, the Appellate Division rejected a defense based on an ongoing operations endorsement, on the ground that the underlying complaint alleged that the damages occurred throughout the four-year period of construction.  For purposes of triggering the duty to defend, the court observed, the question of “[w]hether or not that allegation is meritorious is irrelevant.”

One carrier’s policy included a mold exclusion, and it argued that the allegations in the underlying complaints fell entirely within that exclusion. The court disagreed, because the tenants alleged that some of their property damage was caused by water, and that allegation created a “possible factual and legal basis upon which [the insurer] may be obligated to defend Archstone and Tocci.”

A “designated risk” or “designated operations” exclusion bars coverage for certain specified operations or types of work.  One of the policies at issue in QBE featured an exclusion that exempted from coverage any damage arising from construction of a “residential single-family dwelling, townhouse, condominium, cooperative or multi-track housing development.” The insurer argued that the last term, which the policy did not define, excluded coverage for the claims against Archstone and Tocci.

New York law provides, however, that “whenever an insurer wishes to exclude certain coverage from its policy obligations, it must do so in clear and unmistakable language.” Finding that “multi-track housing development” did not have a “clear and unmistakable” meaning, the Appellate Division held that the term was ambiguous, and that “an ambiguity in an exclusionary clause must be construed most strongly against the insurer.”

One carrier sought to limit its liability to excess coverage; its policy stated that it would provide only excess coverage, “unless [a] contract specifically requires that [its] insurance be primary.”  But the subcontract that carrier insured signed a contract with Tocci, requiring the sub to provide a certificate of insurance that contained this language:  “[Tocci] … and [Archstone] are named as Additional Insured[s] on a Primary and Non Contributory Basis.”  The Appellate Division found that “[t]his contractual requirement could only reasonably be read to require [the subcontractor] to include Tocci and [Archstone] as additional insureds on a primary basis.”  No dice.

The court took a hard line regarding the insurers’ defenses based on conditions precedent and policy exclusions, determining that the insurers failed to raise these defenses in a timely manner.  One group of insurers sought to assert a late notice defense, but the court found that they were estopped under New York’s Insurance Law § 3420(d), which requires that an insurer disclaiming coverage for a bodily injury claim give written notice of its position “as soon as reasonably possible,” Because the insurers’ disclaimers were served from 63 days to one year after a potential late notice defense should have been readily apparent, the court held that the statute barred their claims.

The court also found, without significant discussion, that two insurers could not rely on the mold exclusion or “intended use” exclusion in their policies, because they had failed to issue timely disclaimers on those bases.

Ask the Experts About Bad Faith; Just Be Careful How You Do It

Meredith Whigham Caiafa is an associate at Carlton Fields in Atlanta, Georgia. Connect with Meredith on LinkedIn.