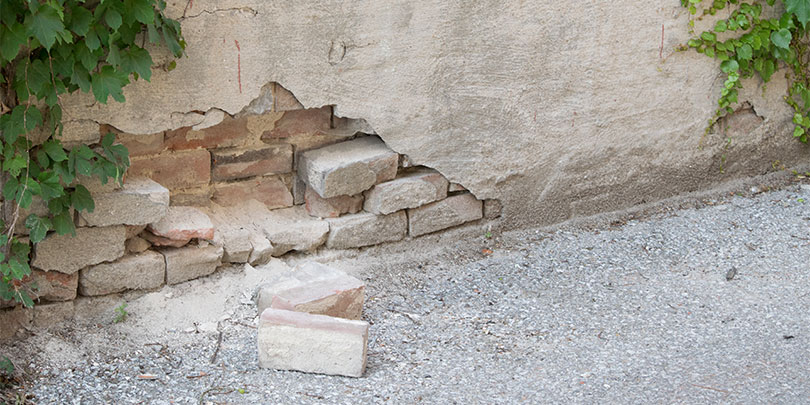 A federal judge in Connecticut recently dismissed claims against insurers related to their denial of a claim by two homeowners whose home’s foundation was crumbling. The case, Hyde v. Allstate Ins. Co., No. 3:18-cv-00031 (D. Conn. Dec. 4, 2018), marks the latest development in what is quickly becoming a major source of litigation.

When the Hydes tried to sell their house in 2016, they discovered that the home’s foundation was crumbling. Their foundation had allegedly been poured with defective concrete that included a mineral that caused it to expand, crack, and, eventually, be reduced to rubble.

According to the State of Connecticut, there may be more than 35,000 homes built over the course of more than 30 years across northeastern Connecticut that are or could experience similar problems. A naturally occurring mineral in materials used to make the concrete causes the problem. It can cost between $150,000 and $250,000 to fix a home’s foundation.

Many homeowners have filed claims seeking coverage for their crumbling foundations. While insurers have generally denied claims as excluded under their policies, several insurers have voluntarily offered assistance to affected insureds. The State of Connecticut has also created a fund for affected homeowners, but it claims to lack enough money to solve the problem alone.

These measures have not stopped serious litigation on this issue. In October, a federal judge granted in part and denied in part a motion to dismiss a putative class action brought by affected homeowners. The judge’s order dismissed claims based on policies that unambiguously excluded coverage for abrupt or sudden collapse but concluded that a number of policies, including policies that used language adopted by the Insurance Services Office, were ambiguous and had to be construed in favor of coverage. Thus, that court found plaintiffs who relied on those policies stated potentially valid claims and their losses might be covered.

In the Hydes’ case, however, the court reached a different conclusion.

The Hydes’ policies provided that they covered “sudden and accidental” loss but did “not cover loss consisting of or caused by . . . settling, cracking, shrinking, bulging or expansion of . . . foundations . . . [or] inadequate or defective materials.” The policies also provided that they did not cover “[c]ollapse” except in the case of an “entire collapse” that was “sudden and accidental” and caused by, among other things, “hidden decay” or “defective methods or materials used in construction.” However, the policies further provided that “[c]ollapse does not include settling, cracking, shrinking, bulging or expansion.”

The court first explained that a number of decisions that had analyzed policy language identical to the language at issue had concluded that coverage was precluded by the policy language at issue and dismissed claims based on decaying concrete. Thus, extensive persuasive authority supported the conclusion that the Hydes’ policies did not cover losses sustained from a decaying foundation. The court then analyzed the policies’ requirement that loss be “sudden and accidental.” It applied law from the Connecticut Supreme Court interpreting that language as requiring a temporal element. According to the Hydes’ allegations, however, the damage to the Hydes’ foundation had not occurred suddenly. Instead, it involved a “process of decay” that occurred “over the course of years.” However, the Hydes also alleged that the process of decay may have caused cracks, bulges, or shifts to appear suddenly. According to the Court, such events were not collapses, however, and fell within the policies’ exclusions for settling, cracking, shrinking, bulking, or expansion. The court also rejected the Hydes’ argument that “sudden” was ambiguous. The court therefore dismissed the Hydes’ breach of contract claim as well as their claims under the Connecticut Unfair Insurance Practices Act and the Connecticut Unfair Trade Practices Act.

This crumbling foundation issue is far from settled. As mentioned, another court recently reached a largely different conclusion, and variations in policy language could lead to significantly different outcomes. In addition, local federal courts have certified questions from crumbling foundation cases to the Connecticut Supreme Court. All of these issues will have to play out, but the decision in the Hydes’ case is helpful, if for nothing else, establishing persuasive case law for future cases.

Insurance policies, like all contracts, must be interpreted according to the language of the policy at issue. The courts will have to continue to put aside the equities and apply the law and policy language in each individual case.

When a Nightclub Is Forced to Say Goodnight: California Appellate Court Applies Broad Reading of “Loss of Use” Provision

Beware Of The Warranty – Second Circuit Relies On Terms Of Warranty, Not Policy, To Make Coverage Determination