You are here: Home / Property / Sixth Circuit Weighs in on Coverage for Marijuana-related Property Loss 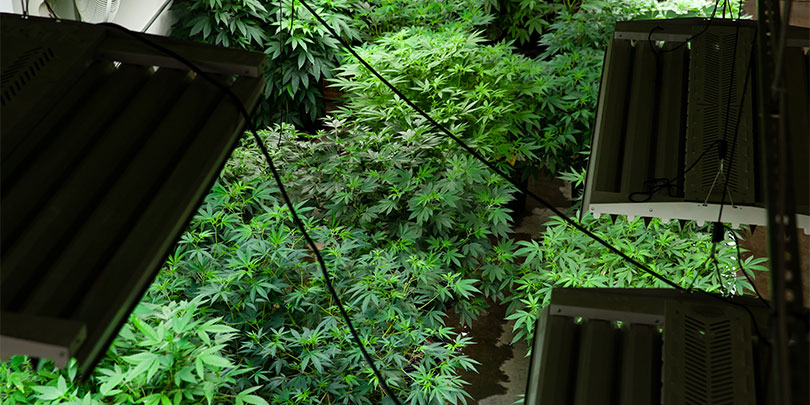 The Sixth Circuit Court of Appeals issued a colorful opinion in a property insurance coverage dispute affirming a denial of coverage for loss arising out of an illicit marijuana growing operation in Michigan. The case is captioned K.V.G. Properties Inc. v. Westfield Ins. Co., No. 17-2421 (6th Cir. Aug. 21, 2018).

The insured was the lessor of commercial properties, including a property leased to certain tenants who, unbeknownst to the lessor, built a large-scale marijuana growing operation, including numerous modifications to the building itself. Federal agents raided the operation. It is unclear from the record what the arrests/charges were based on, or whether any of the tenants were ultimately convicted. But they left behind some $500,000 in damage to the lessor’s property, including holes cut in the roof and other modifications to the ventilation system. The lessor/insured sought coverage under its property policy. The insurer declined coverage.

The insurer analyzed the claim under the Building and Personal Property Coverage Form (“Policy”), pursuant to which the insurer agreed to pay for “direct physical loss of or damage to Covered Property . . . caused by or resulting from any Covered Cause of Loss.” The Policy also contained an exclusion for “loss or damage caused by or resulting from” any “[d]ishonest or criminal act by you, any of your partners, members, officers, managers, employees (including leased employees), directors, trustees, authorized representatives or anyone to whom you entrust the property for any purpose.”

The insurer relied on the ‘criminal acts’ exclusion in declining coverage, and the insured brought a declaratory action seeking a finding of coverage. A Michigan federal district court found in favor of the insurer on summary judgment, citing the exclusion, and the insured appealed to the Sixth Circuit.

The Sixth Circuit affirmed and provided some thoughtful analysis on numerous issues, including some not raised by the parties. The result is (1) a helpful lesson to coverage and appellate lawyers about abandoning or failing to raise arguments, and (2) a reminder that growing marijuana is still sometimes considered a crime.

For the exclusion at issue to apply, the dishonest/criminal act must have been committed by the insured, or “anyone to whom [the insured entrusts] the property.” This language piqued the Sixth Circuit’s interest, and it appeared poised to provide some thoughtful analysis on the issue. Does “lease” mean the same thing as “entrust,” for example? Is landlord-tenant a “trust” relationship? As the Court noted in a footnote, “[t]he list of roles does not include tenants, and there is some question about whether this exclusion should apply to someone who obtains ‘entrustment’ by false pretenses.”

But the Court declined to rule on this point, noting that coverage counsel for the insured explicitly declined to raise the argument. “[The insured] has expressly chosen not to discuss this element or argue it in favor of reversal.” It salted the wound by pointing to the insured’s brief as evidence: “See Reply Br. at 5 (‘Importantly, whether the property is entrusted to the tenant is a question that the Court need not resolve . . . .’).” Thus, the Court declined to rule on this issue, as it does not “answer questions that ‘merely lurk in the record’ and are not asked by the Parties.” (citation omitted). Ouch.

The more interesting analysis is in the Court’s discussion of the legality of marijuana under Michigan and federal law. While its ultimate finding that marijuana is illegal supported application of the criminal acts exclusion, this case does not necessarily contradict a similar opinion issued by a Colorado federal court in 2016 (discussed here), which found coverage for a marijuana grower (in that case, the insured) based on its assessment that the status of federal marijuana laws at that time was such that a similar exclusion was “rendered ambiguous by the difference between the federal government’s de jure and de facto public policies regarding state-regulated medical marijuana.” The Green Earth Wellness Center, LLC v. Atain Specialty Ins. Co., No. 13-cv-03452-MSK-NYW (D. Colo. Feb. 17, 2016). The cases are importantly different; however, as in Green Earth, the insured was a legal state-licensed grower, and its insurance policy was specifically underwritten with its operations fully disclosed.

Here, the Sixth Circuit was nevertheless more willing to ignore federal law altogether based on federalism principles, and the fact that it was exercising diversity jurisdiction:

In diversity cases, we act as faithful agents of the state courts and the state legislature. . . . Since the Michigan Medical Marijuana Act was passed by ballot initiative, we would exercise even more care, lest we (as unelected judges) tread directly on the will of the People of the State of Michigan, who cannot easily correct any error we commit. Exercising the Michigan courts’ common-law power to interpret public initiatives, we would hesitate before reading a Michigan insurance policy to bar coverage for a “criminal act” when Michigan law confers criminal and civil immunity for the conduct at issue. Mich. Comp. Laws § 333.26424(b) (declaring that a person lawfully cultivating medical marijuana shall not be “subject to arrest, prosecution, or penalty in any manner, or denied any right or privilege” under state law).

The Court also recognized the Department of Justice’s “Ogden memo,” which expresses a federal policy restricting the use of federal funds to prosecute marijuana operations that are otherwise legal under state law.

Nevertheless, the problem, the Sixth Circuit found, was that the insured failed to submit evidence that its tenants’ growing operation was legal under Michigan law. For one, it was prima facie evidence of illegality that the federal government assessed the operation at issue not to be in compliance with state law, since it expended resources in conducting the raid. More tellingly, however, the Court pointed to the insured’s own position in an eviction proceeding it initiated against the tenants who had been raided. “In its eviction pleadings against each tenant, [the insured] repeatedly claimed that the ‘[t]enant illegally grew marijuana’ in the unit and stated that the ‘[i]llegal growing of marijuana’ was a ‘continuing health hazard.’” Ouch, again.

Absent evidence of the marijuana operation’s legality under Michigan law, and in light of the insured’s own admission that it was, in fact, illegal under Michigan law, the Sixth Circuit held that the insurer met its burden of proving the application of the criminal acts exclusion, and affirmed the declaration of no coverage. In so doing, it provided some helpful, if somewhat painful, reminders about abandoning/waiving arguments on appeal, and the fact that positional conflicts can and will be used against you.