You are here: Home / Uncategorized / Washington Court Finds Coverage For “Collapse” Is Not Set In Stone 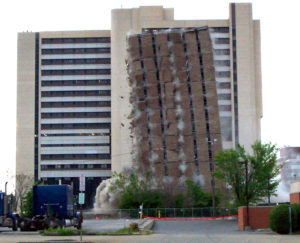 As this blog has documented, the language of insurance policies evolves; it changes to address new risks, and it also responds to new interpretations of old policy provisions. Even if a policyholder maintains a long-standing relationship with a single carrier, the availability of coverage might turn on whether the loss occurred in a particular policy term. Property coverage for “collapse” provides an example of this development. After a number of courts found that the word could be applied to the slow deterioration of structural elements, insurers began to include a narrower definition in the text of their policies. But last month, in American Economy Ins. Co. v. CHL, LLC, No. C15-899 (W.D. Wash. July 7, 2016), a federal court had to decide what the relevant term meant before any policy had defined it. As it turned out, the court held that the undefined term was still too narrow to provide coverage in that case.

The Long, Slow Road To “Collapse”

Structural collapse has been a problem since at least 1400 B.C.E.  Property insurers were arguably late to the game: they began covering losses associated with the “collapse” of all or part of a building in the 1950s. See Nido v. State Farm Fire & Cas. Co., 454 So. 2d 328, 331 (La. Ct. App. 1984). Initially, policies did not define the term “collapse,” other than to state that it did not include “settling, cracking, shrinking, bulging, or expansion.” With just those exclusions to go on, courts took at least three separate approaches to interpreting the meaning of “collapse”:

(1) Some courts held that a “collapse” is “a falling down, falling together, or caving into an unorganized mass.” Thus, a collapse occurs only when all or part of a structure has actually fallen down. Olmstead v. Lumbermens Mut. Ins. Co., 259 N.E.2d 123 (Ohio 1970).

(2) According to other courts, coverage for collapse “does not require that structures fall.” But it does require “serious impairment of structural integrity that connotes imminent collapse threatening the preservation of the building as a structure or the health and safety of occupants and passers-by.” Fantis Foods, Inc. v. N. River Ins. Co., 753 A.2d 176 (N.J. Super. Ct. 2000).

(3) For still other courts, a “collapse” can occur, even in a structure that will remain standing for the foreseeable future, so long as there has been “substantial impairment of the structural integrity of the building or any part of a building.” Am. Concept Ins. Co. v. Jones, 935 F.Supp. 1220 (D. Utah 1996).

The third, most expansive of these interpretations is currently the majority approach, while the narrowest view—that a building must actually fall down—is retained in only a minority of jurisdictions. Assurance Co. of Am. v. Assocs. LLC of Olympia, 379 F.3d 557 (9th Cir. 2004).

In 1999, to resolve this jurisdictional conflict, and to help insurers avoid assuming risks unintentionally, ISO promulgated a policy form that includes an express definition of the word “collapse.” According to that definition,

Yet this definition has resulted in another split of authority. A majority has found the definition unambiguous, and they have applied it to claims in a way that narrows coverage for collapse. E.g., Rapp B. Properties, LLC v. RLI Ins. Co., 885 N.Y.S.2d 283 (App. Div. 2009). But a minority has concluded that the definition is ambiguous, and so that it must be construed in favor of coverage for the insured. E.g., Malbco Holdings, LLC v. AMCO Ins. Co. 629 F.Supp.2d 1185 (D. Ore. 2009).

Insurers’ efforts to clarify the nature of coverage for “collapse” have also been attacked in other ways. In Connecticut, several hundred homeowners have discovered a pattern of cracking in their basement walls, which they attribute to defective concrete from a single supplier. Some of these homeowners allege that their houses “ultimately” will “fall into their basements” if the basement walls are not replaced. These homeowners recently filed a class action lawsuit, Halloran v. Harleysville Preferred Ins. Co., No. 16-0133 (D. Conn.), in which they claim that more than a hundred insurers have “conspired” to deny coverage for concrete claims by, among other things, adopting a narrow definition of the word “collapse.” [Full disclosure: Carlton Fields represents one of the defendants in the Halloran case.]

The complaint in that suit appears to propose a theory that insurers may not change the terms of a homeowners policy at the time the policy is renewed. It states:

This unilateral change [to the definition of “collapse’] was ineffective to alter or amend the terms of the original contract of insurance between the Defendant Insurance Companies and the Plaintiffs and/or putative Class Members and still did not foreclose coverage for homeowners with defective concrete.

It remains to be seen whether plaintiffs will pursue that theory, or whether the court will sustain it.

Past Policies Are Never Dead. They’re Not Even Past.

Whether or not there is merit to the ideas being propounded in Halloran, policies that use the term “collapse” without defining it still govern many coverage disputes. This is because property policies are typically “occurrence” policies, which cover losses that occur during the policy period. Collapse claims often suggest that the alleged “collapse” was a manifestation of hidden damage—such as decay or insect damage—that the structure suffered years before it became apparent. Policyholders seek coverage for such collapses under policies that were in place at the time the original damage allegedly occurred.

Those were the circumstances in the American Economy case. In 2014, CHL, the owner of an apartment building, discovered significant decay of the building’s rim joists. It sought coverage from American Economy, which had issued policies for the period from 1999 to 2002—policies that covered loss caused by “collapse,” without defining that term.

The insurer sent a structural engineer to inspect the building, and the engineer determined that several of the decayed rim joists suffered from “substantial structural impairment.” The engineer defined this to mean that the joists could not support the loads necessary to satisfy the local building code, and, as a result, that the building could be classified as a “dangerous building.” He further concluded that the joists had reached this state sometime between 1999 and 2002, during the old policy period.

The policyholder’s claim for coverage depended on whether “substantial structural impairment” of this kind fell within the meaning of “collapse,” independent of any definition provided by later policies. As it happened, that issue was currently pending before the Supreme Court of Washington, in a case called Queen Anne Park Homeowner’s Association v. State Farm Fire & Cas. Co., 352 P.3d 790 (Wash. 2015). The insurer in American Economy denied the claim, but agreed to reopen it if the Queen Anne Park decision turned out to favor the insured.

The dispute in Queen Anne Park began in 2009, after a condominium homeowners association discovered hidden decay in their buildings. The association alleged that “a substantial impairment of the structural integrity of [some] portion or component” of the buildings had occurred between 1992 and 1998, and it duly asserted a claim under policies issued for that period. As was the case in American Economy, an engineer found that the hidden decay had “substantially impaired” the ability of certain walls to resist lateral loads.

The insurer denied the claim, and the association filed an action for a declaratory judgment in a Washington federal court. The case eventually landed in the U.S. Court of Appeals for the Ninth Circuit, which certified the question of how to interpret “collapse” to the Washington Supreme Court.

The Washington court ruled that “collapse,” as used without any definition in the 1992-1998 policies, was ambiguous—citing the courts across the country that had adopted “different but reasonable definitions” of the term. Because the term was ambiguous, the court also determined that it must adopt the meaning “most favorable” to the insured. Therefore, it “largely” agreed with the association’s contention that “collapse” means “substantial impairment of structural integrity,” and not an “imminent threat” of falling down.

However, unlike most courts that have taken this approach, see, e.g., Sandalwood Condo. Ass’n at Wildwood, Inc., 294 F. Supp. 2d 1315 (M.D. Fla. 2003); Beach v. Middlesex Mut. Assur. Co., 532 A.2d 1297 (Conn. 1987), the Washington court went further. It concluded that “ ‘substantial impairment’ of ‘structural integrity’ means an impairment so severe as to materially impair a building’s ability to remain upright.” The court held that, in the context of the policy, “collapse” meant

This additional language separates the Washington rule from the majority rule discussed above. Although the court stated that it was choosing the definition of collapse “most favorable to the insured,” its choice worked out best for the insurer. On remand, the Ninth Circuit, affirmed the district court’s decision, granting summary judgment against the association. Queen Anne Park Homeowner’s Association v. State Farm Fire & Cas. Co., 633 Fed.App’x 415 (9th Cir. 2016). The Ninth Circuit found it “implausible” that certain walls of the condominiums had become “unfit for [their] function or unsafe” by 1998 (the year the policies expired), because the condominiums had continued to be used until 2012.

The Result in American Economy

American Economy denied CHL’s claim a second time after the Washington Supreme Court had ruled in Queen Anne Park. By that time, CHL had filed an action for declaratory relief in federal court in Washington, and the insurer moved for summary judgment.

In granting that motion, the district court acknowledged that it was not bound by the Ninth Circuit’s unpublished opinion in Queen Anne, but it found the reasoning of that decision persuasive nevertheless. Furthermore, although American Economy’s engineer had found that CHL’s building had suffered “substantial structural impairment” during the policy period, the court found that the engineer was using that phrase in accordance with the usage of the local building code, and not as it had been defined by Washington’s high court in Queen Anne Park. That is, the engineer’s statement did not imply any conclusion about the building’s ability to “remain upright.”

While CHL is correct that the building code is designed to protect safety, that does not mean that a failure to meet the building code necessarily means a building is ‘unsafe’ in the way the Washington Supreme Court used that term. . . . Importantly, the use of the word ‘unsafe’ by the Washington Supreme Court was a gloss on the first definition it had given for a building in a state of collapse: a building suffering from a ‘severe impairment’ of its ‘ability to remain upright.’

In light of the fact that CHL’s building had remained standing without renovation until 2014, the court, following the Ninth Circuit, found it “implausible” that the apartment building “had a severe impairment of [its] ability to remain upright between 1999 and 2002.” The court held that the insurer was entitled to judgment, as a matter of law, that the building had not reached a state of “collapse” during the policy period.

In spite of insurers’ inclusion of a definition of “collapse” in current policies, the policies of yesterday—which did not define “collapse”—are still relevant today. Moreover, the interpretation of these old policies is still evolving.

Tenth Circuit Drills Down Into Roots Of Moral Hazard, Comes Up Dry

A Plague A’ Both Your Clauses: Insurance Probably Won’t Cover Businesses Stung By Zika