You are here: Home / Exclusions/Exceptions / WV Court Rules Earth Movement Exclusion Unambiguously Precludes Coverage Regardless of Whether Landslide Was a Man-Made or Naturally-Occurring Event 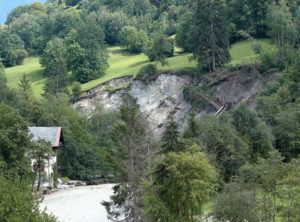 In Erie Insurance Property and Casualty Company v. Chaber, No. 16-0490 (W. Va. June 1, 2017), the Supreme Court of Appeals of West Virginia reversed a lower court’s decision, holding that damage caused by a landslide was excluded, regardless of whether the landslide resulted from excavations or naturally occurred, where the policy excluded loss whether such loss is “caused by an act of nature or is otherwise caused.” The court went on to follow the law of other jurisdictions and find that an ensuing loss provision is not ambiguous and will not reinstate coverage for excluded losses.

‘Til the Landslide Brought It Down

The insured property, a commercial rental unit leased to a motorcycle shop, was damaged when soil and rock slid down a hill at the rear of the property. Based on the policy’s earth movement exclusion for landslide, the insurer denied coverage. The policy exclusion provided:

A. Coverages 1, 2, 3, 4, and 5
We do not cover . . . “loss” or damage caused directly or indirectly by any of the following. Such “loss” or damage is excluded regardless of any cause or event that contributes concurrently or in any sequence to the “loss”:

* * *
5. Earth Movement
* * *
b. Landslide, including any earth sinking, rise, or shifting related to such event.
* * *
This exclusion applies regardless of whether any of the above in Paragraphs 5.a. through 5.d., is caused by an act of nature or is otherwise caused.

But if Earth Movement, as described in 5.a. through 5.d. above, results in fire, explosion, sprinkler leakage, volcanic action, or building glass breakage, we will pay for the “loss” or damage caused by such perils.

Based on the exclusion’s ensuing loss provision that provided coverage for certain resulting damage, the insurer acknowledged coverage for glass breakage at the building, but the amount of that damage did not exceed the policy’s deductible.

The insureds filed suit seeking a declaration of coverage, among other relief. During the litigation, both parties retained engineering experts. The insurer’s expert initially provided an oral report opining that the landslide was caused by improper excavation of the hillside behind the property. Her formal report indicated that the damage was caused by a rockfall resulting from seasonal climate change. The insureds’ expert opined that improper excavation of the highwall area at the rear of the property caused the rockfall and that the highwall failure resulted from a rockfall rather than a landslide.

The circuit court denied the insurer’s motion for summary judgment finding genuine issues of material fact regarding the causes of the damage – whether they were manmade, natural, or a combination of both – and whether there is insurance coverage for the claimed damages. Following a bench trial, the lower court ruled in favor of the insureds. The court determined there was coverage because the earth movement was caused by both natural and manmade events, and the policy did not unambiguously exclude damage caused by rockfall due to improper excavation and that the policyholders could reasonably expect coverage for the earth movement at issue. The court also found the ensuing loss clause ambiguous.

Interpretation of this particular exclusionary language was an issue of first impression for the Supreme Court of Appeals of West Virginia and it reviewed rules of contract interpretation related to determining whether an insurance policy is ambiguous. To be found ambiguous, a policy provision must be reasonably susceptible to more than one meaning or of such doubtful meaning that reasonable minds might be uncertain or disagree as to its meaning. “A court, however, should read policy provisions to avoid ambiguities and not torture the language to create them.”

The court had previously found exclusionary language ambiguous where a policy “excluded certain losses regardless of whether the event ‘arises from natural or external forces, or occurs as a result of any combination of these.” Murray v. State Farm Fire & Casualty Co., 509 S.E.2d 1, 13 (W. Va. 1998). The court had found the word “external” ambiguous and refused to “define the word to include man-made forces as [the insurer] would have us do.” Id. However, the “external forces” language was not in the exclusion at issue.

The court explained that the language at issue “was developed by the Insurance Services Office in 2013 and was apparently designed to minimize confusion regarding the scope of coverage and the nature of the earth movement exclusionary language.” It then noted that courts in several different jurisdictions have interpreted the language since its inception have held that it is not ambiguous. The court concluded by stating:

We have unearthed no authority for a finding of ambiguity in this exclusionary phrase. The phrase clearly and unambiguously excludes coverage for a landslide resulting from a natural event or otherwise. A provision in an insurance policy excluding a loss regardless of whether such loss is “caused by an act of nature or is otherwise caused” is not ambiguous and excludes coverage for the loss whether it is caused by a man-made or a naturally-occurring event. Thus, in the present case, whether the event was triggered by natural forces or improper excavation of the hillside at the rear of the property, the exclusion applies.

The court also quickly dispensed with the insureds’ assertions regarding efficient proximate cause, anti-concurrent causation, and reasonable expectations. The court explained that the anti-concurrent causation clause in the exclusion (excluding the enumerated losses “regardless of any cause or event that contributes concurrently or in any sequence to the loss”) only becomes relevant if the efficient proximate cause of the loss is determined to be a covered risk. “In other words, where neither of the alleged ‘causes’ is covered by the insurance policy, there is no event or occurrence to be evaluated to determine which of the two is the efficient proximate cause; such evaluation would be an exercise in futility.” Because the court determined that the earth movement exclusion “unambiguously precludes coverage for earth movement caused by either natural or man-made events, the question of the proximate cause of the landslide is not relevant.” Moreover, the insureds’ reasonable expectations did not come into play because the court found no ambiguity in the contract. It is the policy’s terms, and not the insureds’ reasonable expectations, that define the coverage.

Last, the court held that the circuit court’s interpretation of the ensuing loss provision was unjustifiable. That clause states that if an excluded earth movement “results in fire, explosion, sprinkler leakage, volcanic action, or building glass breakage, [the insurer] will pay for the ‘loss’ or damage caused by such perils.” The lower court had held the clause was ambiguous and had interpreted it to provide coverage for the entire rock slide because it held that glass breakage is not a peril. The Supreme Court of Appeals of West Virginia disagreed. It noted that other jurisdictions had not found such ensuing loss provisions ambiguous or unenforceable and concluded:

Upon this Court’s evaluation of the ensuing loss provision, we hold that an unambiguous ensuing or resulting loss clause of an exclusion contained in an insurance policy provides a narrow exception to the exclusion but does not revive or reinstate coverage for losses otherwise unambiguously excluded by the policy. Where an uncovered event occurs, an ensuing or resulting loss that is otherwise covered by the policy will remain covered, but the uncovered event itself is not covered.

Thus, the court agreed with the insurer’s application of the “narrow exception” in the earth movement exclusion to provide coverage for the portion of the loss caused by glass breakage. This amount, however, was below the policy’s deductible.

This decision is supported by the plain language of the policy exclusion and demonstrates that courts should “decline[] to adopt a ‘strained interpretation of the language of the policy in order to create an ambiguity where none exists.’” (Quoting BSI Constructors, Inc. v. Hartford Fire Ins. Co., 705 F.3d 330, 334 (8th Cir. 2013).)

One Way Out: California District Court Finds Insurer Had Right to Pay Limits Despite Possible Defense