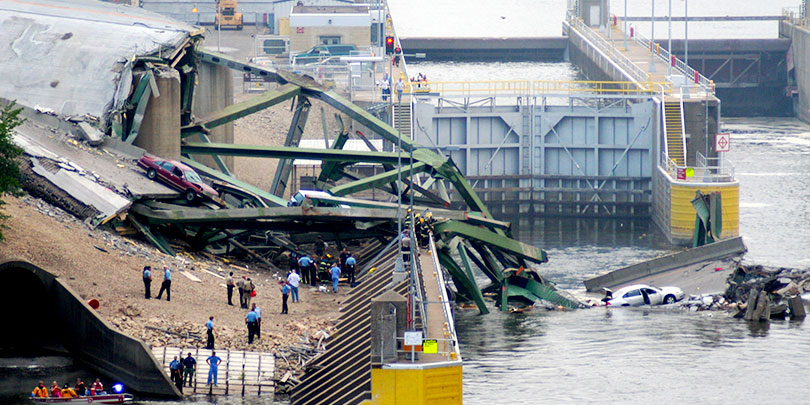 Insurance carriers and policyholders often argue about the scope of policy provisions. Generally, policyholders take an expansive view of insuring agreements, while carriers often construe them more narrowly. But not all coverage arguments follow these familiar lines.

The insured engineering firm contracted to provide design services for two pedestrian bridges.  Among other things, the insured designed the glue-laminated trusses for both bridges. On November 13, 2014, the first bridge collapsed. The second bridge collapsed a day later. Four workers were injured and one worker was killed. The policyholder ultimately admitted that both bridges collapsed because of the absence of mechanical reinforcement at the trusses. The policyholder also admitted that the “lack of mechanical reinforcement resulted from a miscommunication between [the policyholder’s] Project Manager and its Project Engineer.”  OSHA agreed that the policyholder was at fault for both accidents.

Numerous individuals and entities sued the policyholder. The carrier, Continental, argued that the claims related to both bridges were “related claims” subject to a $3 million per claim limit of liability. The policyholder countered by arguing that they were separate claims arising from different bridge collapses and thus were subject to the $5 million total limit of liability.

The policy at issue defined “related claims” as “all claims … arising out of: (1) a single wrongful act; or (2) multiple wrongful acts that are logically or causally connected by any common fact, situation, event, transaction, advice, or decision[.]” The policy defined “wrongful act” as “an error, omission, or other act that causes liability in the performance of professional services for others by [the policyholder].”

The court began by quoting an Eighth Circuit decision applying North Carolina law to find the policy term “related” to be unambiguous and “cover[ing] a very broad range of connections, both causal and logical.” Highwoods Properties, Inc. v. Executive Risk Indem., Inc., 407 F.3d 917, 923-25 (8th Cir. 2005). The term would only be ambiguous, the court said, “if the facts fall on the margins of a broad reading.” Id. at 924. The court further noted that “claims are ‘related’ even if they involve distinct and acts and decisions and affect separate people.”

Turning to the facts of this case, the court found that the bridge claims were related claims.  They arose from the same design failure, pursuant to a single contract, and under the supervision of the same engineer and project manager. Moreover, both design failures resulted from a “miscommunication” between the project engineer and project manager. “Although there may have been some different actors and decisions involved in the design and construction of Bridge 1 and Bridge 2,” the court held that “such differences do not defeat a finding of relatedness.”

The court also made two important ancillary points. First, it rejected the argument that the introductory phrase “arising out of” requires that “related claims” must arise solely out of the same wrongful act. This would “strip the phrase ‘arising out of’ from the broader context of the ‘related claims’ provision.”

The court also noted that wrongful acts are “logically connected if there are shared facts, circumstances, and decisions.” This is an important clarification, as the policy does not define the phrase “logical connection.”

Stewart Engineering is only the latest case in a trend across the country interpreting aggregation language broadly. This is true whether a broad reading benefits the carrier or policyholder. Carriers should be mindful of both their policy language and their prior positions on aggregation language.

To Defend or Not to Defend? Northern District of Ohio Provides Guidance for Determining Whether to Defend an Arbitration