You are here: Home / Damage/Loss / NY Appellate Court Rules “Blanket Ordinance or Law Coverage” not as Blanket as Insured Hoped 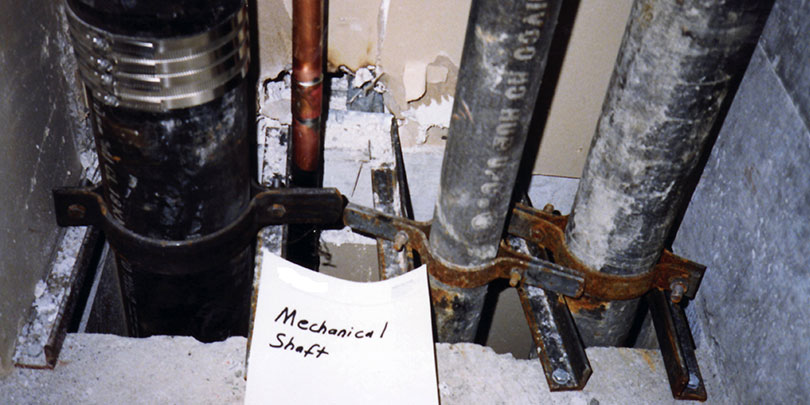 In 1947, some Bedouin shepherd boys were tending their sheep and goats near the ancient settlement of Qumran, near the Dead Sea.  One of the boys threw a rock into an opening on the side of a cliff and heard something break.  Curious, they entered what was a small cave.  Inside, they discovered a large clay vessel that had been broken by the thrown rock.  It contained several scrolls.  This led to the discovery of more clay jars and more scrolls, what would later be come to be known as the Dead Sea Scrolls, arguably the greatest archeological find of the 20th Century.  On November 26, 1983, a gang of robbers gained entry to the Brink’s-Mat warehouse in London with the goal of stealing five or six million dollars’ worth of cash.  Once inside the facility, however, they discovered three tons of gold bullion and made off with approximately $80 million worth of gold, jewels and cash.  Most of this haul, from what was dubbed “the Crime of the Century,” was never recovered.[1]

The point is, sometimes you go looking for one thing and you find something else, maybe a lot more than you bargained for.  Which brings us to “ordinance or law” provisions in first-party property policies.  Ordinance or law coverage is fairly standard in commercial first-party property insurance policies (and is generally available via endorsement in homeowner policies).  A typical ordinance or law provision provides coverage for costs necessary to bring undamaged portions of a building into compliance with an ordinance or law regulating the repair or construction of the building, as long as a covered cause of loss occurs to the covered property and that loss is increased by the ordinance or law.  In other words, if a building is damaged and that damage is covered under the policy, the policy will also cover reconstruction or repair of undamaged portions of that building necessitated by enforcement of a zoning or land use ordinance or law.

This was the precise issue addressed recently by a New York appellate court in St. George Tower, et. al. v. Ins. Co. of Greater New York, 2016 N.Y. Slip Op. 03100, 2016 WL 1589831 (N.Y. App. Div.  April 21, 2016).  The Insured owned an apartment building in Brooklyn insured under a commercial property policy issued by Insurance Company of Greater New York (“GNY”).  In 2010, testing of the building’s fire suppression system resulted in a flood that damaged the ceilings and floors of a number of apartments.  GNY agreed that the loss was covered under the policy.  The flooding caused mold, and during the course of the mold remediation, it was discovered that the concrete slabs underneath the flooring in several apartments was in “a distressed and deteriorated condition,” which, not surprisingly, constituted a violation of the New York City Building Code.  The Insured sought coverage for the cost of repairing the concrete slabs to bring the building into code compliance.  GNY rejected the claim, and the insured sued for coverage.

The lawsuit turned on the GNY policy’s ordinance and law endorsement, which provided coverage in the event the building “sustains direct physical damage that is covered under this policy and such damage results in the enforcement of the ordinance or law.”  Affirming the court below, the appellate court rejected the insured’s ordinance and law claim.  The court noted that the (latent) concrete slab problem that was uncovered during inspection of the building was not related to the covered damage at all but was, rather, an unrelated problem with the building’s infrastructure.  The ordinance or law coverage, the court found, cannot be triggered simply because, in the course of an inspection necessitated by the covered event, structural problems amounting to code violations happen to be discovered.  Instead, the court ruled, “there must be some direct connection between the covered damage and the enforcement of the ordinance….[I]t is not sufficient that the chain of events beginning with the covered event led to the inspection that uncovered otherwise unrelated code violations.”

In reaching this conclusion, the appellate court considered and distinguished an earlier New York Supreme Court decision, City of Elmira v. Selective Ins. Co. of New York, 83 A.D.3d 1262, 921 N.Y.S. 2d 662 (N.Y. App. Div. 2011) and a New Jersey decision interpreting the same GNY ordinance and law provision at issue in the St. George case, DEB Assoc. v. Greater New York Mutual Ins. Co., 970 A.2d 1074 (N.J. Super. 2009).  In both those cases, the applicable ordinance and law provisions were held to apply to the enforcement of the building codes at issue.  What made Elmira and DEB different from the St. George loss was that in each of those cases, there was a direct connection between the covered loss and the enforcement of the applicable law or ordinance.  For example, in Elmira, a windstorm caused a portion of the subject building’s wall to collapse.  In assessing the building’s condition post-loss, an engineer concluded that the wall’s collapse was facilitated by hidden deterioration of mortar, which weakened the wall.  He reported that the remaining (non-windstorm damaged) walls were similarly compromised.  This prompted the local enforcement officer to find the building to be in violation of several sections of the applicable state building code.  That connection was sufficient, the court held, to trigger the applicable policy’s ordinance and law provision.

The St. George court took a fairly narrow view of the required causal connection between the covered loss and the ordinance or law enforcement.  Other courts have held that where the inspection giving rise to the code enforcement occurred only because of the incident causing the covered damage, the causal connection is made, however attenuated the code enforcement event is from the covered cause of loss.  Either way, as with the Dead Sea Scrolls and the Brinks-Mat haul, a property insurer offering ordinance and law coverage may find that while it thinks it is covering a readily identifiable loss at the outset, it may end up with more than it anticipated.

[1] Earlier this year, among the 11 million or so leaked documents that have been dubbed the Panama Papers, are documents reflecting efforts to launder the Brinks-Mat haul.