You are here: Home / Duty to Indemnify / Peerless, This is Not: Sixth Circuit Finds No Latent Ambiguity in Consent to Settle Requirement in Excess Policy 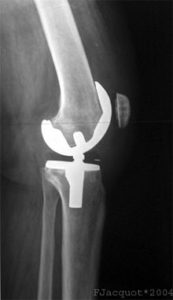 In the late 1990s, Stryker Corp. acquired a subsidiary of Pfizer, Inc. that manufactured and sold artificial knee joints, which were later proved defective. Stryker was sued by several recipients of the defective knees, and also faced exposure to Pfizer for indemnification for claims that arose after Stryker purchased the company.

Both insurance companies initially declined to defend or indemnify Stryker. XL denied coverage outright, while TIG took the position that its excess layer was not implicated. Stryker filed coverage lawsuits against XL and TIG; during the pendency of that protracted litigation (which lasted over a decade), Stryker unilaterally settled all of its individual product-liability claims for $7.6 million, and was separately adjudicated liable for $17.7 million of Pfizer’s losses. After a court ruling that XL was liable for Stryker’s losses, XL paid them – but not in chronological order. XL first paid the larger Pfizer judgment, which exhausted its limits. Accordingly, Stryker turned to TIG to cover the $7.6 million direct action settlement.

the amount of the principal sum, award or verdict actually paid or payable in cash in the settlement or satisfaction of claims for which the insured is liable, either by adjudication or compromise with the written consent of [TIG], after making proper deduction for all recoveries and salvages.

Because Stryker had not obtained (or requested) its consent to the $7.6 million settlement, TIG refused to provide coverage. Stryker filed suit.

On appeal, the Sixth Circuit reversed the district court. First, the appellate court analyzed the purpose and history of the latent ambiguity doctrine, citing the textbook example of the two ships named Peerless in Raffles v. Wichelhaus, 2 H. & C. 906, 159 Eng. Rep. 375 (Ex. 1864). There, two parties contracted for a shipment of cotton “to arrive ex ‘Peerless’ from Bombay.” Id. The terms were perfectly clear on the surface; but an ambiguity resulted when two ships named Peerless arrived from India, and the parties disputed which ship the contract referred to. As the Sixth Circuit explained, this presented a latent ambiguity because “[t]he ambiguity in that contract arose, not from the words, but from their connection to the real world.” Stryker, 842 F.3d at 427.

This case, according to the appellate court, was not like Raffles because there was no alternate real-world meaning for the plain language. Rather, there was simply no ambiguity in the policy at all:

Stryker insists that the term ‘claims’ actually means liability for settlements made without consent, so long as the compromise originally occurred below TIG’s coverage layer. But the policy itself defines the universe of possible ‘claims’ in two, and only two, ways. Liability must be established either by ‘adjudication’ or by ‘compromise with the written consent of [TIG].’ Stryker’s reading thus goes too far: it seeks to fill a gap that does not exist, and contradicts the fundamental principle that ‘[p]arol evidence under the guise of a claimed latent ambiguity is not permissible to vary, add to, or contradict’ any other ‘plainly expressed terms of [the] writing.’

Overall, Stryker’s facts  are probably unusual, and the unique situation that resulted was based largely on the timing of the claims and the primary insurer’s payment of them, which was itself driven by protracted coverage litigation. However, the Sixth Circuit’s decision is an example of a court reading clear policy terms based on their plain meaning, and not stretching the doctrine of latent ambiguity beyond its particular limits even in an unusual factual scenario. In addition, this case demonstrates that even where excess policies follow form, they still may have provisions (particularly related to consent and payment) that are specific to them and should not be overlooked.

Unlike Friendships, Policy Exclusions Are Not Severable In West Virginia

Minnesota Discovers Limits To Its Regulator’s Power Over Insurers