You are here: Home / Exclusions/Exceptions / War: What is it good for? Business Loss and the War Exclusion 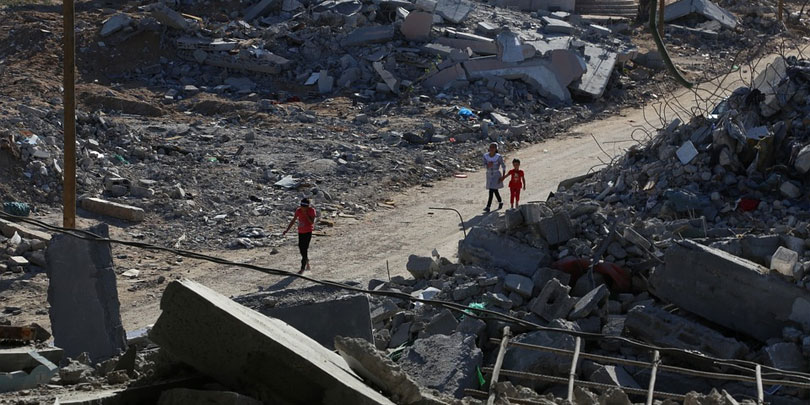 In summer 2014, Israel and Hamas were engaged in armed conflict. Thousands of residents of Gaza and Israel were killed or injured, and much of Gaza City was destroyed by rocket fire and other heavy weapons. The Israeli Defense Force dispatched tens of thousands of ground troops to the area, and international attention from the United Nations and other interested parties, including the United States, focused on the “conflict.” But was it a “war?”

The United States has also grappled with the political issue of whether to define armed conflict as “war.” Often, the issue relates to the Constitutional authority to declare war. The United States has not formally declared war since World War II, so many refer to undeclared wars as “conflicts.” But we still know a war when we see one, right? Merriam-Webster’s definitions of war include: “a state of usually open and declared armed hostile conflict between states or nations,” “a state of hostility, conflict, or antagonism;” and “a struggle or competition between opposing forces or for a particular end.”

But concepts of traditional war are changing. A chilling short film produced by Ban Lethal Autonomous Weapons explores a potentially not-so-brave new world of war, and the weaponization of artificial intelligence and other technology. The film notes that “smart” technology meant to minimize “collateral damage” combined with the dramatically lowered cost of technology overall have given, not only nation states, but terrorist groups—and even individuals—the ability to carry out the equivalent of targeted nuclear strikes that could take out “the bad half” of a city.

Shortly before armed conflict between Hamas and Israel arose in summer 2014, Universal Cable Productions LLC (UCP) was to begin filming of a pilot episode of a television show in Israel, which was considered a safe filming location, as of June 2, 2014. Soon after, however, three Israeli teenagers were kidnapped, and later discovered to have been killed. Israel cited evidence of Hamas involvement.

UCP completed production of its pilot episode on June 26, 2014, and then went on hiatus, with full production of five episodes slated to resume late July 2014. By that time, however, Hamas responded to Israeli allegations of its involvement in the Israeli teens’ deaths, and began firing rockets into Israel. In response Israel launched “Operation Protective Edge,” an “offensive campaign against Hamas.” The escalating campaign resulted in an assessment by UCP’s security team that conditions were no longer safe for production, which was then relocated to Croatia and New Mexico, resulting in unforeseen expenses associated with the business interruption.

The court analyzed two issues in depth to determine that the claim was excluded from coverage under the policy: (1) whether the “conflict” was, in fact, a war; and (2) whether Hamas had sufficient status as an autonomous nation state so as to come within the purview of traditional notions of war.

Notably, for underwriting purposes, and in contrast with the definition of “war,” the policy Atlantic issued, with awareness and concern about the production’s location, did not include any terrorism-related exclusion. It did, however, contain what Atlantic described as a standard war exclusion, excluding losses “caused directly or indirectly by: 1. War, including undeclared or civil war; or 2. Warlike action by a military force, including action in hindering or defending against an actual or expected attack, by any government, sovereign or other authority using military personnel or other agents; . . . .:

Addressing the first issue, the court cited the nature of the conflict itself, and the manner in which it was described and reported, inside and outside Israel/Gaza, as the “50-Day War” due to its duration. As the court noted:

During this time, Hamas and other militant groups fired over 4,000 rockets and mortar shells into Israel, while the Israeli government conducted over 5,000 airstrikes within Gaza and a 20-day military ground operation in Gaza. Hamas and Israel carried out seaborne attacks against each other, while Israel also attacked Hamas from the air. News outlets, the State Department, and the United Nations all reported well over 2,000 Palestinian fatalities, of which at least half were civilians. It was reported that approximately 11,000 Palestinians were wounded. The Israeli Defense Force reportedly lost 67 soldiers and 6 Israeli citizens. According to a State Department report, “by August 5, hostilities during Operation Protective Edge internally displaced approximately 520,000 persons in Gaza. Approximately 10,000 Israelis reportedly were displaced by the conflict. The damage to infrastructure also was severe: Israeli armed forces destroyed electrical, water, and other public infrastructure, with damage estimates ranging from the equivalent of $4-8 billion. (citations to the record omitted).

The court concluded that these hostilities clearly constituted “war” both under the “plain meaning” rule – that is, as understood by an ordinary lay person – as well as pursuant to several dictionary definitions cited, including Black’s law and Merriam-Webster.

Is “War” Confined to Nation States?

The court also addressed in some depth the question of Hamas’ status as a nation-state or its equivalent, in response to UCP’s suggestion that it was a terrorist group, and that there was no terrorism exclusion in the policy. The court rejected this argument. It discussed at length the evidence submitted by the parties, including Congressional Research Service reporting, which detailed the turbulent political history of the Gaza strip, and Hamas’ role in the uncertain state of sovereign governance in that area:

The Palestinian political identity emerged between 1923 and 1948. In 1947, the United Nations intended to create two states in what are now Israel and Palestine, one Jewish and one Arab. For reasons that are still disputed, it founded only the Jewish state, Israel. In June 1967, the Six-Day War occurred, and Israel gained control over the entire area that constituted Palestine. However, Israel only effectively annexed East Jerusalem and the Golan Heights, leaving the West Bank and Gaza Strip under military occupation. In the 1990s, the Palestinian Authority (“PA”) was granted limited rule in the Gaza Strip and parts of the West Bank. In 2005, Israel unilaterally withdrew its military forces and all of its civilians from Gaza, leaving at least some amount of control to the PA. According to a Congressional Research Service report, “[a]lthough [it is] not a state, the PA is organized like one—complete with democratic mechanisms; security forces; and executive, legislative, and judicial organs of governance.” The Congressional Research Service identifies Fatah and Hamas as the largest Palestinian political movements, although Hamas also has been characterized as a terrorist group. In 2006, Hamas (or at least Hamas-backed candidates) won a majority of the seats in the Palestinian Legislative Council. And since 2007, when Hamas took over the Gaza Strip from competing factions by force, Hamas has exercised some amount of power and has performed political, military and social welfare activities there. By June 2014, Hamas reached a new agreement with Fatah to establish a consensus PA government. (citations to the record omitted)

Given the above, the court concluded that Hamas bore sufficient indicia of a governing authority to remove it from the purview of terrorist and other splinter groups, which were discussed in cases cited by UCP finding the “war” exclusion inapplicable, based on the status of the parties engaged in armed conflict. This therefore brought Hamas’ conflict with Israel squarely within the definition of “war.”

The court noted that status as a nation state in the traditional sense is not required to find a party engaged in war: “[i]n the common meaning, ‘war’ can include conflicts both between sovereign entities and between other groups; the word does not require a detailed assessment of the structure of one or more of the parties to the conflict or their precise international standing. Plaintiffs offer no evidence to demonstrate that the individuals negotiating the Policy intended anything other than the plain and ordinary meaning…” Finally, the court rejected UCP’s argument that its holding would have foreign policy repercussions for the United States, given that the U.S. State Department designated Hamas as a “terrorist” group. “[T]he United States’s designation of Hamas as a terrorist organization does not mean that it cannot also be a de facto government for purposes of this dispute.”

Modern warfare is changing. Notions such as a “war on terror,” semi-autonomous groups purporting to govern regions within national borders, warfare fought not with “boots on the ground” but rather unmanned drones and other new technological advances, will have numerous unintended real world consequences, including bodily injury, property damage, business interruption, and other losses that might otherwise be covered by insurance. Insurers and policyholders alike will need to be wary in determining precisely which types of unforeseen developments might be covered, and which might be excluded.