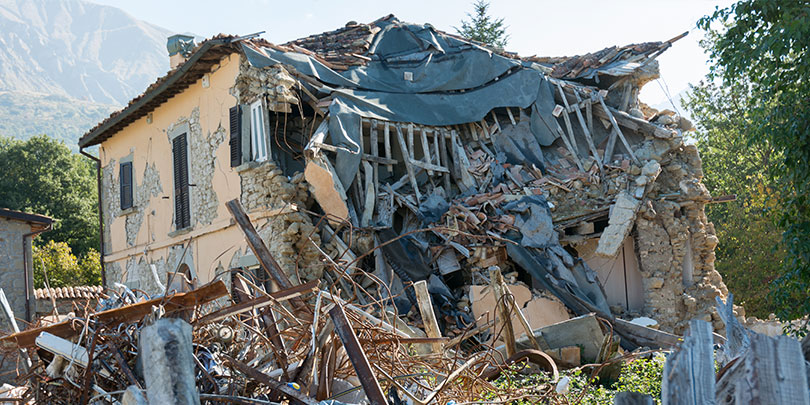 A year ago, we wrote about a rapidly emerging area of insurance litigation in Connecticut: crumbling foundations. As a quick recap, tens of thousands of homes in northeastern Connecticut built over a span of more than 30 years may have been constructed with defective concrete that causes basement walls to prematurely deteriorate and eventually become structurally unsound.

The problem, known as alkali-silica reaction (ASR), is the result of a chemical reaction caused by pyrrhotite, a natural occurring mineral used in the production of concrete from a manufacturer in northeast Connecticut. Last year, we noted that a federal judge had dismissed one ASR claim against Allstate Insurance Co. and that local federal courts had certified questions from crumbling foundation cases to the Connecticut Supreme Court.

The facts of all three cases are typical of the many lawsuits regarding crumbling foundations that homeowners have brought against insurers in the past few years. Homeowners noticed cracking and/or crumbling in their basement walls. They submitted claims under their homeowners insurance policies, often after a structural engineer determined that the cracking was the result of ASR, a nonreversible condition. The insurers denied the homeowners’ claims, generally relying on language excluding coverage for settling and/or faulty materials. The homeowners then filed lawsuits for breach of contract and violations of the Connecticut Unfair Insurance and Unfair Trade Practices Acts.

The plaintiffs argued that the deterioration of the concrete in their basement walls substantially impaired the structural integrity of their homes such that the homes were in a state of collapse and were therefore covered because the policies at issue covered collapse.

To support their argument, the plaintiffs relied on the Connecticut Supreme Court’s decision in Beach v. Middlesex Mutual Assurance Co., 205 Conn. 246, 532 A.2d 1297 (1987). In that case, the court concluded that the term “collapse” “is sufficiently ambiguous to include coverage for any substantial impairment of the structural integrity” of an insured’s home at least when, as was the case in the policy at issue in Beach, “collapse” was undefined.

In its primary decision, Karas v. Liberty Insurance Corp., the Connecticut Supreme Court concluded that the Beach standard applied to the Liberty policy at issue because that policy did not clearly define “collapse,” although the policy did provide that “[c]ollapse does not include settling, cracking, shrinking, bulging or expansion.” When not clearly defined, as it was in this case, the court noted that the term “collapse” can mean “not including mere settling or cracking, but including settling or cracking that results in substantial impairment of a home’s structural integrity.” The court explained, however, that the insurer could have easily limited its collapse coverage by using language that “unmistakably connote[s] an actual collapse.”

The court then expounded on the “substantial impairment” standard established in Beach, explaining “that, to meet the substantial impairment standard, an insured whose home has not actually collapsed must present evidence demonstrating that the home nevertheless is in imminent danger of such a collapse.” The court further explained: “[W]hether [the] evidence satisfies th[at] standard in any particular case necessarily will depend on the specific facts of the case and the strength and credibility of the expert testimony adduced by the insured and the insurer.”

In light of the fact that Karas involved questions certified from the district court, the Connecticut Supreme Court did not render a decision as to whether the “substantial impairment” standard was satisfied in this case and left that decision up to the federal court. The district court’s decision will be one to watch out for: The crumbling foundation in Karas was particularly severe, and the homeowners had already reinforced their basement walls with wood shoring based on the recommendation of an engineer. Karas therefore presents at least an arguable case for satisfying the “substantial impairment” standard, but the plaintiffs’ expert was undoubtedly asked whether he believed that the home was in “imminent danger of … collapse,” and the Connecticut Supreme Court’s decision does not reflect how the plaintiffs’ expert answered that question.

In the first, Jemiola v. Hartford Casualty Insurance Co., the court considered a common issue in crumbling foundation cases: Which homeowners insurance policy applies. Like many insurers, Harford Casualty’s homeowners policy did not clearly define the term “collapse” for many years. Beginning in 2005, however, Hartford Casualty added language to its policy narrowly defining “collapse” as “an abrupt falling down or caving in of a building or any part of a building with the result that the building or part of the building cannot be occupied for its current intended purpose.” The policy went on to note that a building that was in danger of falling down was not in a state of collapse, a building that was standing was not collapsed, and a building is not in a state of collapse even when it shows evidence of cracking, bulging, settling, etc.

The plaintiff in Jemiola asserted that she noted cracking in her master bedroom in the late 1990s, nails popping out of her kitchen walls in between 2005 and 2006, and more nails displaced from windows around her house in 2009 and 2010. She claimed she first noticed cracks in her basement in 2006, but a contractor told her they were normal. In 2014, she noticed more cracking in her basement and learned that her house likely was constructed with defective concrete.

A structural engineer hired by the plaintiff opined that her home did not become structurally impaired until there was some outward manifestation of cracking and fracturing in her basement walls. Based on the plaintiff’s observations, that occurred by 2006.

The court noted that in order for the pre-2005 policies to apply, there must have been a substantial impairment of structural integrity prior to 2006. The combined testimony of the plaintiff and her expert established only that such an impairment existed by 2006, not that it existed before then. The plaintiff’s expert did not testify that the plaintiff’s earlier observations regarding cracks in her bedroom and nails in her kitchen wall were connected to the cracks in the basement.

As a result, the court applied the post-2005 policy language and concluded that the plaintiff’s home, which was still standing, had not “collapsed” under the policy. The court noted that the language in the policies required a temporal abruptness requirement and concluded that “a building that is still standing, even if it is in danger of falling down, has not suffered a collapse within the meaning of the policy.” The court noted, however, that the “issue of how extensive an actual collapse must be before coverage is triggered is not before” it and therefore declined to determine “whether the policy’s partial collapse provision is internally consistent with” other provisions.

In closing, the court noted that even if it agreed with the plaintiff’s claim regarding what policy applied, it would apply the standard articulated in Beach and conclude that summary judgment was proper because the plaintiff’s home was not in imminent danger of falling down.

In the final case, Vera v. Liberty Mutual Fire Insurance Co., the court extended its holding in Karas to a home that was only mildly affected by ASR. According to the plaintiffs’ expert, the home was one of the least affected homes he had inspected. There were narrow spider cracks in the basement but no visible signs of bowing. The home was afflicted with ASR and the walls would eventually begin to bulge, but the expert could not testify with a reasonable degree of engineering probability that the walls would begin to bulge within the next hundred years, although he did say that it was probable that the walls would need to be replaced in that time frame.

Because Vera also involved a certified question, the Connecticut Supreme Court stopped short of applying its decision to the fact before it. The court’s recitation of the facts of that case, however, leaves little doubt that the plaintiffs will have an exceptionally hard time prevailing. According to the plaintiffs’ own expert, the plaintiffs’ home was not “in imminent danger of … collapse.”

A Win for Insurers

The Connecticut Supreme Court’s decisions are a win for insurers. First, the court reaffirmed insurers’ rights to define “collapse” narrowly to avoid coverage in situations in which a home’s foundation is crumbling but has not yet fallen down. Second, the court’s explanation of the Beach standard that applies to policies that do not sufficiently define “collapse” as requiring an “imminent danger of … collapse” effectively eliminates many claims against insurers. The policy in Vera is one such example. While some houses may be in imminent danger of collapse, many of them likely are not and will not be for many years. Nevertheless, crumbling foundations will likely remain an area of considerable claims activity and potential litigation for the foreseeable future, if for no other reason than the high stakes for individual homeowners.