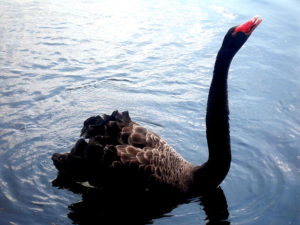 It feels like a black swan event: last month, in GEICO Gen. Ins. Co. v. Harvey, No. 4D15-2724 (Fla. Ct. App. Jan. 4, 2017), a Florida appellate panel unanimously overturned a jury verdict, on the ground that the plaintiff’s bad faith claim was insufficient as a matter of law.  A dissection of this rara avis can yield some insight into the limits of judicial tolerance for claims against insurers.

On August 8, 2006, James Harvey and John Potts collided while driving near West Palm Beach. Mr. Potts did not survive. Mr. Harvey’s car was registered in two names—his own and that of his business—and it was insured under a GEICO automobile policy, with $100,000 in liability coverage.  Mr. Harvey promptly reported the accident to his insurer.

Three days after the collision, the insurer advised Mr. Harvey, in writing, that a claim by the decedent’s estate could exceed his policy’s $100,000 limit. It also informed him that he had the right to hire his own attorney.  Mr. Harvey responded to the letter by hiring a lawyer.

The following month, Mr. Potts’s estate sued Mr. Harvey for wrongful death, and it eventually obtained a jury verdict of $8.47 million.  The premise of the ensuing bad faith action was that the insurer had brought about the excess judgment—by failing to give Mr. Harvey timely notice that the estate was requesting information about his finances.

Show Me The Statement

On August 14, 2006—that is, less than a week after the accident—the insurer was contacted by a representative of Mr. Potts’s estate.  The representative asked that Mr. Harvey, the insured, provide a statement that would (among other things) identify both his personal and business assets and declare whether he had been using his car for business purposes at the time of the accident.  The representative’s testimony conflicted with that of GEICO’s adjuster on some points, but it was undisputed that the estate did not set a deadline for Mr. Harvey’s statement, and that it did not make receipt of the statement a condition for settling the claim.

It appears that the insurer did not immediately convey this request for a statement to Mr. Harvey.  Instead, on August 17, it tried to settle the claim.  It sent the estate a check for the $100,000 policy limit and asked for a release in return.

The estate rejected the insurer’s offer a week later, in a letter dated August 24, 2006.  The letter stated that GEICO had refused to make Mr. Harvey available (a claim that GEICO’s adjuster disputed) and repeated the estate’s request for financial information.  GEICO did not receive the letter until August 31, 2006—17 days after the insurer’s first contact with the estate.

On that day, GEICO’s adjuster faxed a copy of the estate’s letter to Mr. Harvey, and she discussed it with him by telephone.  The adjuster also contacted the estate’s attorney, to determine what kind of financial statement he wanted. Again, the estate did not set a deadline or timeframe within which the statement was to be provided. Before the day was over, the adjuster received a second letter from the estate’s attorney, memorializing his conversation with GEICO, and forwarded it to Mr. Harvey.  She also sent Mr. Harvey a form of an affidavit with which to provide the requested information.

The next day, Mr. Harvey informed GEICO that his attorney was unavailable until September 5. He asked the adjuster to inform the estate that he was working on the financial disclosures, but she failed to relay the message—in spite of receiving instructions from her supervisor to do so.  After September 5, Mr. Harvey and his attorney both failed to take any further action respecting the requested statement.

On September 13, the estate filed a wrongful death lawsuit against Mr. Harvey and returned GEICO’s check. This lawsuit culminated in a jury verdict for the plaintiff awarding $8.47 million.

If Only We’d Known

Mr. Harvey then filed a bad faith action against GEICO in a Florida state court.  In that suit, the jury learned that the adjuster who handled the claim had received negative performance reviews and had occasionally run into difficulties managing her workload.  It also heard important testimony about what the key actors would have done if the insurer had handled the claim differently.

Thus, Mr. Harvey swore that he would have provided the estate with full financial disclosure—if he had been informed of the estate’s request around the time it was first made, on August 14, rather than on August 31.  He did not deny, however, that he failed to provide the statement between August 31 and September 13 (when the wrongful death suit was filed), even though he had compiled all the relevant information.

What Is Bad Faith?

The trial court’s denial of the motion for a directed verdict was subject to de novo review.  The Fourth District Court of Appeal, citing Boston Old Colony Ins. Co. v. Gutierrez, 386 So. 2d 783 (Fla. 1980), explained that insurers have seven obligations to their insureds:

An insurer is obligated to (1) advise the insured of settlement opportunities; (2) advise as to the probable outcome of the litigation; (3) warn of the possibility of an excess judgment; (4) advise the insured of any steps he might take to avoid same; (5) investigate the facts; (6) give fair consideration to a settlement offer that is not unreasonable under the facts; and (7) settle, if possible, where a reasonably prudent person, faced with the prospect of paying the total recovery, would do so.

An insurer’s negligence in the discharge of these obligations might be evidence of bad faith, but it does not amount to bad faith:

An insurer’s imperfect handling of a claim does not, by itself, equate to bad faith; the essence of a bad faith claim is that the insurer put its own interests before that of the insured.

Whether the insurer has put its own interests before those of the insured must be determined on the basis of “the totality of the circumstances.”

Applying these standards, the appellate court found that the bad faith claim should never have been submitted to the jury, because the evidence at Mr. Harvey’s trial had been insufficient as a matter of law.

First, the court found that GEICO had satisfied all of its obligations under Boston Old Colony.  The plaintiff suggested that the insurer’s delay in conveying the estate’s request for financial information might constitute a failure to “advise the insured of settlement opportunities” (Obligation No. 1).  The court found, however, that GEICO discharged that obligation by reporting the estate’s request on August 31.  It found the adjuster’s delay immaterial, because the estate had not made the information a condition for settlement.

It was also arguable that the insurer had failed to give “fair consideration to a settlement offer” (Obligation No. 6), but the court found that it could not have discharged that obligation, because the estate never made an offer.

Second, the court observed that the insurer had tendered the policy limits just nine days after the accident, and that this fact negated any suggestion that GEICO was “acting upon what it consider[ed] to be for its own interest alone.”  Thus, even if the adjuster neglected certain communications between the insured and the estate,

these facts merely show that GEICO could have perhaps ‘improved its claims process,’ not that it acted in bad faith.

GEICO did not fail to meet any deadlines or other requirements established by the estate, as a requirement for settling the claim and avoiding the filing of a lawsuit against its insured.

Furthermore, “where the insured’s own actions or inactions result, at least in part, in an excess judgment, the insurer cannot be liable for bad faith.”  If the fact that the estate received no statement from Mr. Harvey was, indeed, a “cause” of the excess judgment, then Mr. Harvey’s inaction between August 31 (when he learned about the estate’s request) and September 13 (when the wrongful death suit was filed) made him responsible— “at least in part”—for that outcome.

Finally, the court provided an observation that it did not tie directly to any of its legal arguments:

What Have We Learned?

Every claim depends, to a certain extent, on the assertion of a counterfactual: finding that one event was the cause of another is as much as to say that the second event would not have occurred in the absence of the first.  In this case, however, the plaintiff’s statements were clearly unconvincing. The appellate court went out of its way to state that the judges did not believe Mr. Harvey’s testimony that he would have acted differently, if only the insurer had asked him for a statement 17 days sooner.

On the other hand, the court seemed impressed by the facts that the insurer had tendered the policy limit less than two weeks after the accident, and that the adjuster’s lapse in response to the original request for a statement (on August 14) was not repeated when the estate asked for the second time on August 31.

It is unusual for a Florida court to find that a bad faith claim is so defective that it should never reach a jury.  But where, as in this case, the insurer has not made any effort to pay less than the full amount of the policy, the court was willing to examine the theory that the jury had accepted with a much more critical eye.  Harvey will be a useful decision for insurers to cite in support of future motions for summary judgment.  It clearly reaffirms the principle that imperfect claims handling does not equate to bad faith.

Minnesota Discovers Limits To Its Regulator’s Power Over Insurers